by Ellouise Walton
in Entertainment
0 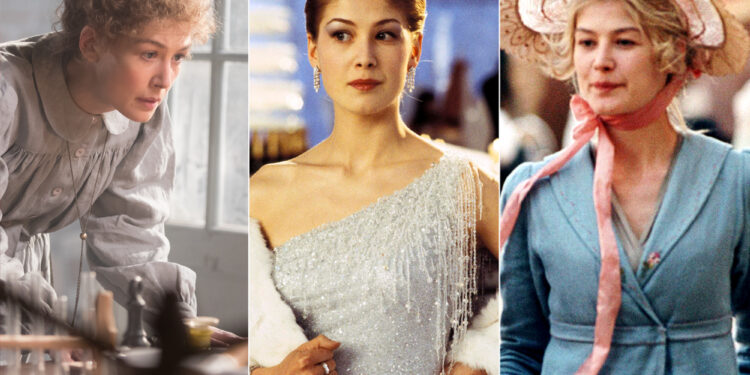 Sting sang about how hard it is to be an Englishman in New York. He obviously didn’t know what it was like to be English in Hollywood. The fact is that actors like Rosamund Pike have to prove themselves double to succeed in the world of the film industry. Some give up at the very beginning when the first criticisms catch up with them – but not Rosamund Pike. After several underrated performances, this English actress managed to prove to Hollywood that she is still worth it.

Actress Rosamund Pike recently revealed that she buries the acting awards she received in the garden. As a guest on the TV show Ellen – Pike said that the ritual is probably deeply psychological and connected with some deep intruder syndrome. And truth is, Rosamund probably felt that way. As a British actress in Hollywood, it was not always easy for her. Many times her roles were underrated, but Rosamund denied everything in practice. Awarded with an Oscar, Golden Globe, and other awards – she showed America and the entire world that her acting is not to be underestimated. However, at the very beginning, it was not always easy for her. Here are some movies and roles by Rosamund Pike that were underrated.

It is the first Bond film directed by art director Lee Tamahori, the first in which the Bond girl (Halle Berry) is a bigger star than Bond, and most importantly – the first Bond film that relies heavily on a computer-generated image. Many representatives of the critics pointed out that this is the worst film from the Bond series. Still, we are inclined to judge that Die Another Day is the most intelligent, interesting, and radical Bond film from the eighties onwards. Some will say that the weak point of this film is Halle Berry who failed to impose herself with charisma – although she has a bigger role in the plot than any Bond girl so far. She was completely pushed out by the naughty blonde Miranda Frost (Rosamund Pike). Beautiful, cold, extravagant, and dangerous – Miranda Frost in a way embodies the film as a whole.

Hostiles is a slow-burning modern western that draws the best from the cast and visual impression – but it has a lukewarm story that is unconvincing to follow the film with more attention. It is another in a series of projects whose priority is political correctness – so the potential was kind of wasted, or so some who have seen this movie think. However, according to those who reviews Scott Cooper Miami Beach filmmaker’s piece – you can understand that this film has extremely demanding character roles played by Christian Bale and Rosamund Pike in the role of a widow Rosalie Quaid.

It is a comic spy thriller directed by Oliver Parker. In this latest adventure, an incredible informant in Her Majesty’s Secret Service will have to stop a group of international assassins before they eliminate the world leader and cause global chaos. In addition to Rowan Atkinson, the movie stars Gillian Anderson as director of MI7, Dominic West as special agent Simon Abroughs – but also Rosamund Pike as a behavioral psychologist in MI7 and the girl that Johnny English is in love with.

How Much of Texas Energy Is Green? Everything You Need to Know About Renewable Energy